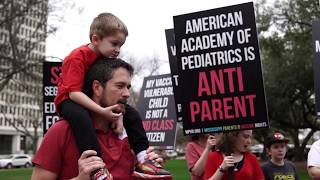 “I don't think we know exactly how that happens, whether it's a direct result of the virus or an immune response to the virus that causes encephalitis after influenza. We know it can occur, but rarely,” said Dr. Rachel Orscheln, an infectious disease physician at St. Louis Children’s.

Dr. Orscheln wasn't treating Layla but said complications from the flu tend to impact people with immature or weak immune systems. The flu shot can be a defense.

“The flu shot isn't perfect, but it reduces the risk you will have complications, be hospitalized or die from influenza,” Dr. Orscheln said.

Layla did get her flu shot, so her family is struggling to understand how she got so sick so quickly. “We want to make parents aware this is a possible complication” said Kile, Layla's Aunt. Parents in Memphis, Tennessee, are mourning the loss of their baby girl Ja’Liyah Cortize Turner, after she passed away in her sleep, less than four days after receiving seven vaccines. Her mother Quavia felt pressured into getting her daughter further vaccinated, even though she didn’t want to, because her daughter had a bad reaction from the round of vaccines given to her earlier.

Ja’Liyah’s autopsy report did not mention the vaccines even though she still had the knots on her legs at the injection sites. Her cause of death was ruled “Unknown, Undetermined.” The autopsy stated Ja’Liyah had no significant medical history contributing to her death. Yet, it is very significant Ja’Liyah had just received seven vaccines four days earlier.

Tennessee is ranked third in the nation for having the highest infant mortality rate in the United States. [1] The CDC and vaccine manufacturers admit life-threatening allergic reactions and death can be the outcome of receiving any vaccine. [2] When children are given multiple vaccines during each pediatric visit, like Ja’Liyah was, this can increase their chance of suffering a lethal reaction caused by overstimulation of their undeveloped immune system. [3]

A person’s chance of suffering an adverse vaccine reaction is greater if they carry certain genes that make them more susceptible to vaccine injuries or if they have any underlying illnesses at the time of vaccination. [4]

African-American and some Native American Indian infants suffer from sudden infant death syndrome (SIDS) at rates two to three times more than other babies. [5] Ja’Liyah was born from African-American and Native American descent. This ethnic background suggests she had a higher probability of carrying a specific gene associated with an increased risk of injury if she were vaccinated. Her parents were not informed of this information.

Our Daughter Died at 9 Weeks, After Receiving 9 Vaccines in 1 Day Belgian parents Raphael Sirjacobs and Beatrice Dupont lost their nine week old daughter Stacy, who  died just one week after her first vaccinations and left her twin sister Lesly behind. The twins received Prevenar, a vaccine against meningitis and pneumonia, Infanrix Hexa, a six in one vaccination for diphtheria, tetanus, polio, pertussis, hepatitis B and Haemophilus type B, and finally the Rotarix, a preventive vaccine for gastroenteritis. This means that these tiny vulnerable babies received a staggering nine vaccines in one day, vaccines that may have caused one of them to die. The parents were denied an autopsy.

In 2018, the Italian an independant research group Corvelva analyzed the contents of the Infanrix Hexa vaccine and discovered 65 harmful contaminants. As bad as that was, Corvelva scientists were also shocked to find that the vaccine contained no antigens. None. So, it could not have provided any immune protection to any disease. So Stacey died for no reason except for GSK's financial benefit. CORVELVA VACCINEGATE: GSK's Infanrix Hexa Robin Stavola is a mother who tragically lost her young daughter, Holly, to the second MMR vaccine dose, which was a requirement for Holly to attend kindergarten in New Jersey.

After Holly suffered a severe reaction to the vaccine, leaving her convulsing, brain damaged and on life support, her family was told by the doctors that Holly would remain in a vegetative state and would not recover. Holly’s parents felt helpless and they reluctantly agreed to have their daughter removed from life support.

Robin was awarded compensation for Holly’s death after it was determined the MMR vaccine caused Holly to suffer acute encephalopathy (ADEM).

With support from the governor of New Jersey, Holly’s Law was created. This law can save your child from receiving a potentially lethal second dose of the MMR vaccine, required for some children to attend school, if no vaccine exemption was filed on their behalf.

When Holly lay suffering for 65 hours in the two hospitals she was transferred to, her pediatrician did not even show up to visit her. Pediatricians push the vaccines but often don’t show up to the hospital to help care for your child when they become vaccine-injured.

Finally, grieving family members are led to believe that the hospital Chaplain is there to help them though the grieving process, but some are paid to help increase the number of organ donations.

Multiple Studies Show Sudden Death a Side Effect of Tamiflu

The antiviral medication (oseltamivir) was found to cause severe side effects such as hallucinations, severe vomiting and diarrhea, and even death, in it’s own clinical trials and postmarketing surveillance.

Many people who die of the flu, either were vaccinated, or given Tamiflu:

Kaylee Roberts, 16 years old, dies from flu after being given Tamiflu.
https://www.cnn.com/…/flu-ohio-teen-kaylee-rober…/index.html

Luca Calanni, 11 years old dies from the flu. Got a flu shot 2 months prior, and dies after Tamiflu.
https://buffalonews.com/…/death-of-11-year-old-from-flu-ha…/

Liliana “Lily” Clark, 13 years old dies 2 weeks after she was diagnosed with the flu. Dies after Tamiflu.
https://nypost.com/…/idaho-teen-dies-two-weeks-after-she-w…/

Jade DeLucia, 4 years old, received a flushot in March 2019 but still came down with the flu in December.
https://www.dailymail.co.uk/…/Four-year-old-girl-not-vaccin…

“The mechanisms of sudden-onset type adverse reactions to oseltamivir.” 2017 https://www.ncbi.nlm.nih.gov/pubmed/27364959

The lawsuit claims the drugmaker's scheme involved publishing misleading articles falsely stating that Tamiflu reduces complications, severity, hospitalizations, mortality and transmission of influenza. The company then used those articles to aggressively market the drug to the government for pandemic use. Relying on the supposed truthfulness of Roche's claims, federal and state governments spent about $1.5 billion to stockpile Tamiflu to combat influenza pandemics, according to the complaint.

"As alleged in the complaint – Tamiflu does not do what Roche promised," said attorney Mark Lanier of the Houston-based Lanier Law Firm. "Roche hid this fact for many years by selectively citing its studies and suppressing the data about Tamiflu. The company utilized lobbyists, key opinion leaders and ghostwriters to promote Tamiflu with a deceptive promise to governments fearful of an influenza pandemic."

The lawsuit brings claims under the False Claims Act, which allows individuals to bring claims on behalf of the government. Unsealed on September 10, the lawsuit seeks reimbursement of taxpayer funds spent to purchase tens of millions of courses of Tamiflu for the Strategic National Stockpile. Roche is vulnerable to a judgment in excess of $4.5 billion because the False Claims Act mandates payment of triple damages, plus civil penalties.

Following the cyber-attack on Merck in June 2017, for the first time in a very long time, researchers have the ability to view in plain sight, a natural experiment whereby one vaccine [Recombivax] was abruptly swapped out for another [Engerix-B] – replacing the very adjuvant many critics are concerned about, AAHS – with an aluminum hydroxide adjuvant contained in Engerix-B. Neither has a published independent safety profile but AAHS is suspected to be more problematic due to its immunogenicity profile.

Just prior to the ransomware attack, two scientists from Europe wrote to the FDA to express concern that recent research on aluminum adjuvants in vaccines suggested that these adjuvants were contributing to Autism Spectrum Disorder and other neurological disorders.

We now have more than a year’s worth of data to examine since the attack in 2017 when Engerix-B was introduced. On average there were 29 deaths reported annually for fifteen years prior to the attack (2003 to 2017). In 2018 there were only 6 reported (to end of November 2018). Two of those deaths followed Recombivax. Assuming the same death rate to the end of the year, at most there will be 7 deaths recorded, resulting in roughly 75% less deaths since Recombivax was discontinued as a pediatric vaccine

If you missed it, I wrote a post summarizing the history of hexavalent vaccines in 2019. You can read it here. I also want to remind you of the scandal around Merck's AAHS adjuvant (which has been described as barbed wire coursing through the veins), how Merck's AAHS hepatitis B vaccine called Recombivax all but disappeared from the market after their June 2017 cyber attack, and how deaths from hep B vaccination have plummeted since.

Thousands of Lives Destroyed by the HPV Vaccine

19-year-old Jasmin Soriat died in her sleep. She suffered a wide range of health problems after getting her second injection of the HPV vaccine. She’s only one of thousands of young teenagers to suffer extreme side effects after receiving the HPV vaccine.

Larry Cook has compiled 25 vaccine-death stories suitable for sharing on social media. See and share them at Stop Mandatory Vaccination

Learn about Pending Vaccine Laws and Connect with Parents Nearby: